Both KK and I pulled out of the Two Oceans road race this year. KK’s fractured femur is still healing & I had not trained enough to be sure that my ankle would make 3 hours out on the road after my December injury.

In the two days running up to the race, our social media feeds were flooded with angry and frustrated runners who had been sorely let down at race registration. Delays in number collection, queues of over 2 hours at the race expo. Definitely not what runners need a day before a long race!

As we woke up at 5:25am on Saturday morning to catch the start of the half marathon broadcast on TV, snuggled under the duvet and hearing the wind howling outside, I did think for a minute “thank goodness I’m not running this year!”

The runners started to make their way over the finish line. One by one, the tracking app showed their results, their Facebook updates showed photos of medals and joyful celebrations. The FOMO began to creep in.

Later that morning, we drove through to Cavendish to do some shopping and weaved our way through some of the back markers on the race route with just an hour to go before final cut-off. It stung! That’s usually me!

Seeing the runners making their way up University Drive, remembering first hand how their tired bodies would be screaming with exhaustion to stop, but knowing that the finish line was so very close! From that last uphill stretch, you can hear the crowds, you hear the loud speakers, you can smell victory! 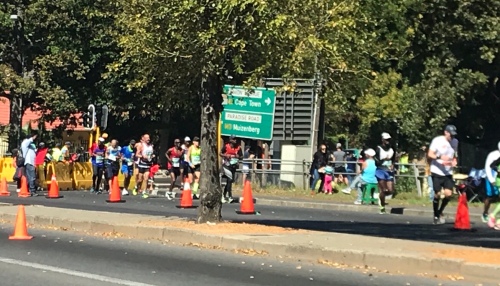 My heart had climbed out of my chest and was racing with them on that hot tar! I wished it was me! I wished that I was 1km away from my Two Oceans medal. Damn!

Another year will pass and I’m still trying to find my feet and map out where my running journey will take me this year. Shorter distances? More half marathons?

Whatever I decide, that Two Oceans ballot will open in November and I won’t hesitate. My love hate relationship with Two Oceans is bipolar. Some years I hate the race, other times I fall in love. This year I missed it and feel I need to come back and experience it all again.

Runners FOMO is the worst!