Most runners will be familiar with the question from people, “Are you running the Comrades Marathon?” It’s as if all runners just do, right? So when KK decided he was going to attempt to run his first Comrades this year, I didn’t think much of it. I mean, he runs twice a week and we usually enter half marathons on weekends. So how bad can it be? But as his training started, I soon realized there was a lot more to Comrades training than what most people think.

Mornings have been characterised by KK sneaking out of the bedroom at 4am to go and run (while I snuggle deeper under the duvet). The training has been relentless. A typical week involves running two hours on Tuesday, two hours on Thursdays, core training with a personal trainer on Mondays and Wednesdays, then 90 minutes on a Saturday followed by a marathon on Sundays. The next week, it starts again but this time with bursts of hill training and speed work. 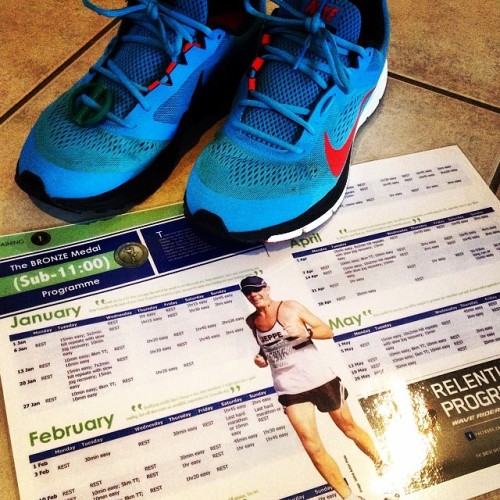 His commitment to the training has impressed me the most and is where I have learned the biggest lesson. Firstly, he has a printed out & laminated training schedule of what distances to run and when lying next to his bed as well as in his drawer at work (thanks to his running partner DSM). He has followed each week religiously. By keeping the schedule in front of him at all times, his eyes are set clearly on the goal and he is doing what needs to be done to achieve that goal.

Secondly, when KK talks about the Comrades marathon, it’s always positive. His excitement oozes success. He discusses his race plan with confidence. I can see that in his mind, he envisages that finish line. He talks about the medal and going back next year.  The vision of victory is there!

I think in life, most of us want to go out and do great things, conquer those mountains, be awesome. But it takes hard work, commitment and keeping your eye on the goal. Too many people drop off eating plans; quit hobbies, give up on their dreams because it’s just too hard and too much effort required.

But in actual fact, to achieve big goals in life takes big commitment and lots of dedication. More importantly it’s to believe you can do it! To believe you can win! In my eyes, KK’s already there. He’s my champ!

5 thoughts on “The goal of Comrades”