We’ve never run Kaapsehoop before but had heard many reviews of the race itself. Fast, easy, downhill all the way. Great for a PB. Running with wild horses. It sounded magical, so off we went.

The race profile. Downhill all the way home.

My highlights of the race:

What I thought would be an easy race because it was mainly downhill all the way proved to be quite challenging for me. I know that I hate flat races. But downhill ones aren’t exactly easy either. I was consistent in my pace but not that much faster. Running downhill felt like it took loads more energy.

The road had an uncomfortable camber for almost the entire way and I woke up the next morning with blisters between my toes but only on my right foot. The heat made it pretty tough too and I take off my running peak to the marathon runners who battled it out on the road in those temperatures!

What I lacked in speed on the downhills I certainly made up for on the hills. The last three km’s were hell but I felt strong. I’m quite happy with my time. I had hoped to run under 2:40 but came in at 2:44 (my Pick ‘n Pay & Vaal PB) which is great considering I’ve struggle to run under 2:50 since picking up with 21km runs at the end of winter. I can only improve on this and Dischem is coming up in January. 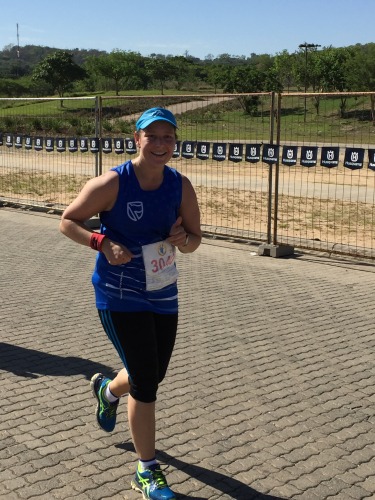 I was so happy to see that finish line!

So did we see any wild horses? Nope, which means we must go back, right? And besides, with such a well organised race in such a beautiful setting, it’s an easy decision.

2 thoughts on “Running with the horses: a race review of Kaapsehoop”