This was KK’s third Comrades marathon. He has successfully run the up and the down run, receiving his back-to-back medal, but one thing I’ve learnt is that even if you’ve run Comrades before, each year is different. The training was different, the build-up was different and yes, even the weekend down in Durban was a different experience this time around.

We stayed at the Fairmont Zimbali Resort for the first time. It’s beautiful and when I forgot the stress of the race that hung over KK’s head, it felt like we had escaped to Bali for a getaway weekend. The resort was nice and quiet too which was good for KK to rest his legs and head before the race. 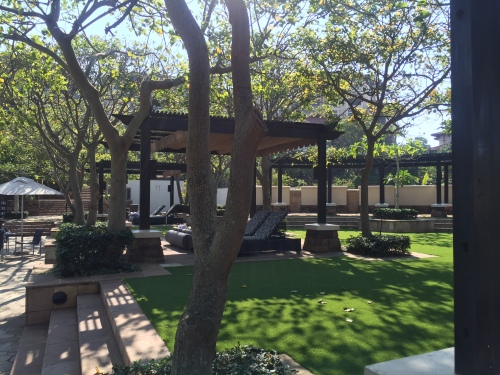 First things first, the Expo which was packed with both nervous runners and excited supporters. It was a bonus to pick up KK’s race pack in record time. 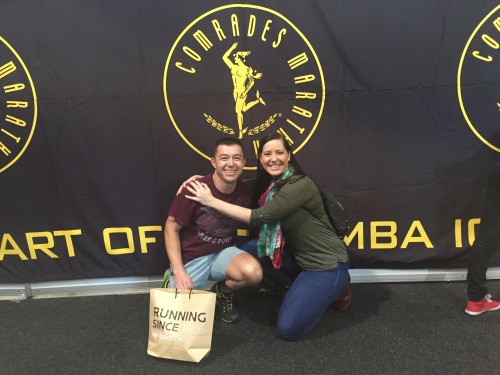 Back at the hotel and I forced KK to put his feet up and relax. We did lots of napping and snacking and just walking around the gardens of the hotel. And yes, wine for me. It was bliss.

Preparation on my part meant packing a bag of sunscreen and more snacks. Mapping out my supporter’s route was to ensure that KK knew exactly where to look out for me. Here’s me being all clever with my Comrades route map but KK knows I can’t read a map. Thank goodness for Waze. LOL! 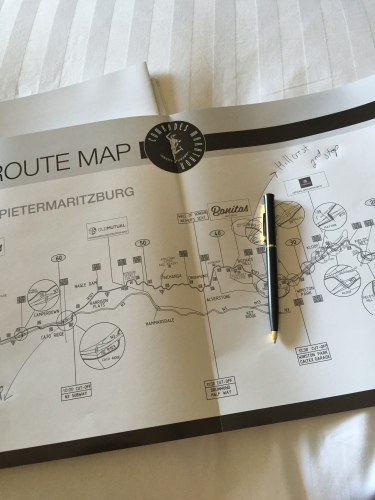 The morning of the race is always incredibly tense. As much as you’ve prepared for the race, it all comes down to how you feel on the day. KK had been battling with an Achilles heel injury which weighed heavily on his confidence to predict what time he would run. 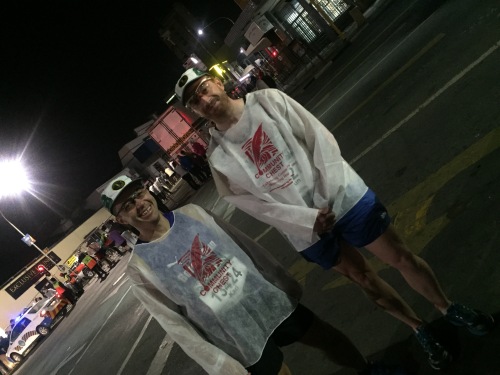 Only runners are permitted beyond these gates which somehow looked like once they were through, they were trapped in a cage with no escape! 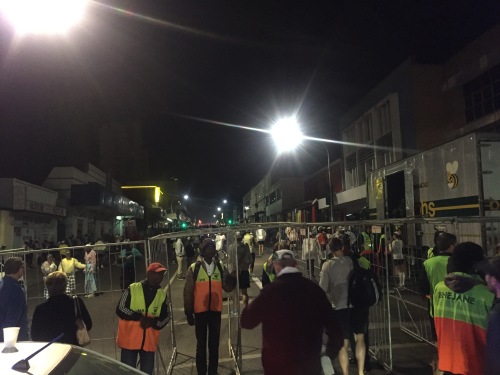 The first stop was Cato Ridge. I must admit that finding the right spot to stop was tough because it was pitch dark. I have serious night blindness and even though it felt like I was sitting on the dashboard trying to see the road, my supporter companion Linda, looked very nervous! 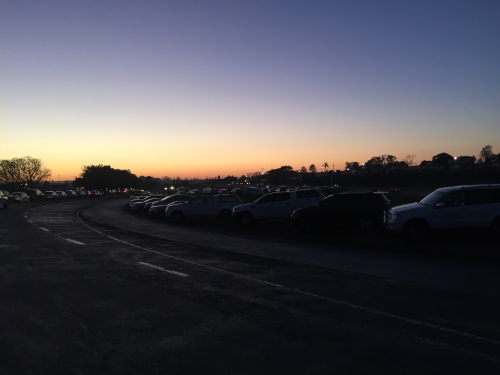 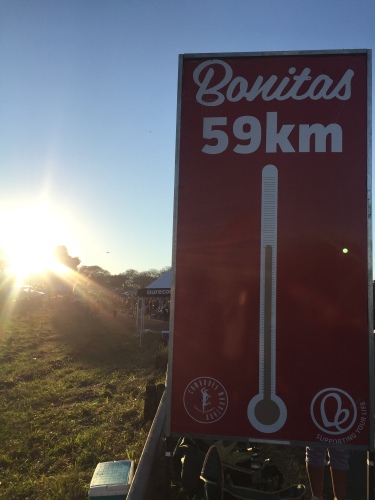 The first batch of runners started to trickle passed. I was amazed at how fast they ran! And then I even spotted a partially blind runner. Amazing! 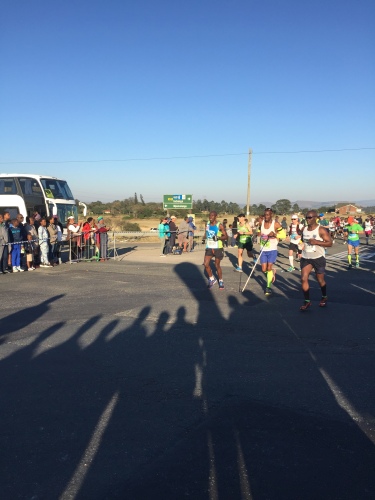 The first stop where we met KK and Shaun W was at the 30kms mark. I have run 32kms before and felt like death. But they looked fresh and were still smiling – a good sign! 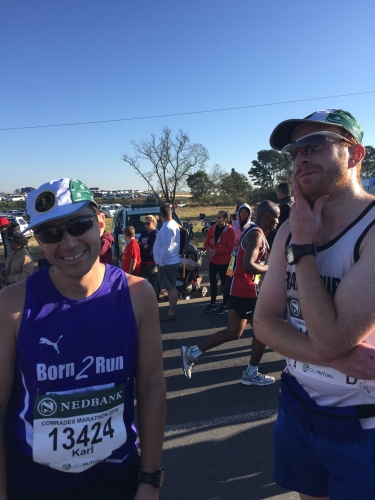 It’s hard work being a supporter but one family had a good idea. While standing on the side of the road, a runner ran up to me, handed me a card and ran off. On the one side of the card was a beautiful motivational message from his daughter. On the other side, a message to me with a cellphone number, “Please can you send my wife a message and tell her where I am and that I’m fine.” Brilliant idea and of course, I sent the message with pleasure and a smiley face! 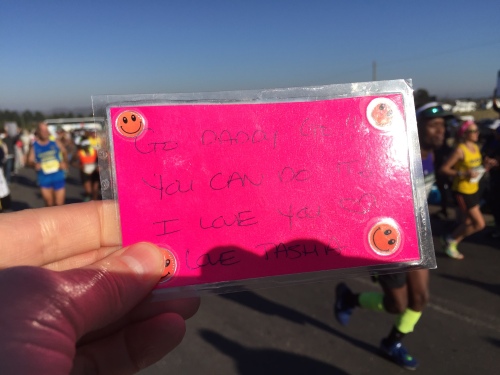 After a while, we shot through to our next stop, Hillcrest. Here we were able to find some toilets, a Woolies and a place to grab some lunch. #priorities

Somewhere along the way, KK and Shaun W had split up. When KK reached us at Hillcrest, he was still smiling (still a good sign) and felt strong but running alone. I knew that once he had reached this spot, the head was required to take over the work as the legs had done all they could. Comrades is a mental race after about 60kms…I was nervous! 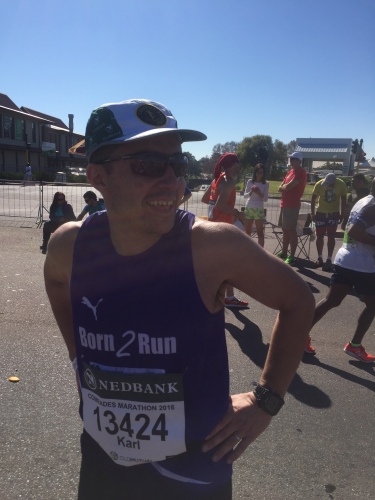 The advantage of the down run to Durban is that there is ample place for spectators to sit and watch the runners finish the race. It looks much bigger on TV and we chose the spot where we could watch the runners enter the stadium as well as run down the last strip to the finish line.

I don’t know how people were able to track their loved ones during the race in previous years, but with new technology, we were able to watch all our family & friends who were running via the Ultimate Live app on our cellphones. It helped to know exactly where KK was and allowed me to be ready to see him enter the stadium, still smiling! 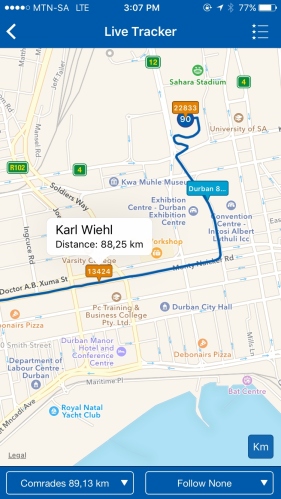 He did it! My heart leaped when I finally found him on the field. It was a PB and he was thrilled with his run. 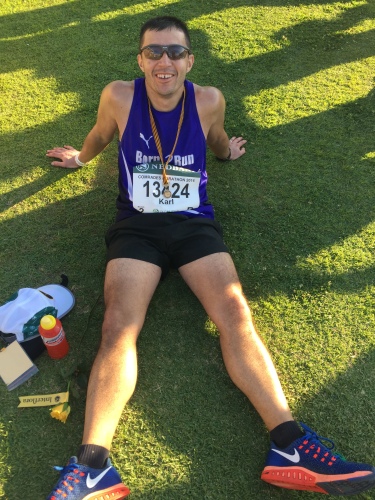 To take on an ultra marathon such as Comrades means you have to not only have done the hard physical training, but your head needs to be right. Many of the Comrades runners have admitted to dropping into a very dark head space along the route when they were overwhelmed with with negative thoughts. To pull yourself out of this and not quit must take incredible strength. For me, this is what stands out as the most inspiring and amazing quality a Comrades runner possesses. 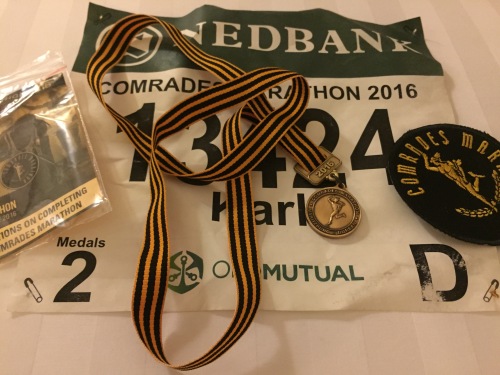 It’s been a week and KK is itching to go run again. He was told to rest for at least two weeks but every now and then I catch him checking out Strava and looking at trail running sites. He loves Comrades and I know we’ll be back again next year. I can’t wait!