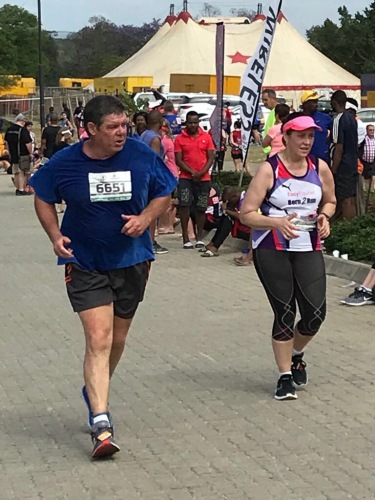 This photo was taken two years ago when I had the privilege of running the Kaapsehoop half marathon with my Dad.

The excruciating pain is visible on our faces. As we rounded the corner on that final 500m, I thought my legs were going to rip off they were so sore.

This year was no different.

I don’t have any photographic evidence but I’ll tell you one thing. It’s been a couple of days since I finished my race, and the DOMS has hit hard. I’m sore. I can’t walk properly and I’m struggling to move like a human.

Runners claim that Kaapsehoop is an “easy run” because it’s all downhill. Some friends have achieved incredible personal bests (PBs) on this course. But it can also bring you to your knees! Ask Brenda.

This is one of my favourite World Cup stadiums!

It was our 5th trip down to Kaapsehoop. I’ve run 2 Kaapsehoop half marathons before and two of the 10km races, although after I ran the 10km last year, I vowed that if we were going all the way down to Nelspruit, I would only run the half marathon.

I didn’t have a race strategy on Saturday, which often confuses your running head.

I was running to kill time while KK was out on the 42km, gunning for a respectable Comrades qualifier. (Which he ran in 3:40!)

I had not trained properly for a 21km race. At some points I ran hard, other times I walked and chewed on sweets (which had melted in my pocket making my hands all sticky which was a great distraction) and then there were bursts of running from tree to tree (although this didn’t last long). My goal was to finish.

I wiggled at the cars driving along side us playing Bok support tunes thinking, gosh, the pressure in that Springbok changeroom must be enormous! And I giggled at the Celtic Harriers runner in the tutu whose quirky commentary had everyone running close to her in stitches. She’s a familiar face from Two Oceans.

When you get to this point of the race, there is no better and worse feeling. You’re so close, but in so much pain and still so far!

I even stopped to play with Ann Ashworth’s dog at one point (I was avoiding that final 3km uphill trek that lay ahead).

It’s a race we enjoy and love and will be heading down next year on the 7th November to tackle it again. My fears that it had gotten too big were misplaced. Watching the Soweto & NYC marathon on TV the next day, I was gasping at those numbers!

Over 52 000 runners at the New York City Marathon!

Congrats to everyone who ran this weekend and achieved goals – physical and/or mental. It’s a downhill finish to end off the year … (for now).

Congrats on your Two Oceans and Comrades qualifier KK!

2 thoughts on “My run down of the Kaapsehoop half marathon”