When you work in a corporate environment, you come to realise that stress, politics and work pressure are part of everyday life. I have found the past few months particularly tough, not only for me, but also for my colleagues.

I have searched for many ways of encouraging them. Out of desperation, I have even proposed a rather cheesy idea to the head honcho of the department, hoping it would bring a spark back to people’s faces. But no luck. When people are down and demotivated, it’s very difficult for them to see anything positive in whatever you do.

But something magical happened today. Something unexpected. It snowed in Jozi.

At first, staff would casually walk up to the windows and look down. But as it became heavier and heavier, excitement grew and more and more people gathered together at the windows. It took one person to say, “Hey! Let’s go outside and play in the snow!” for everyone to grab their jackets and head on out. The excitement and giggling was electric.

What a sight to see hundreds of people from other departments all with the same idea, queuing at the ‘cattle gates’ to get passed security and out of the building. 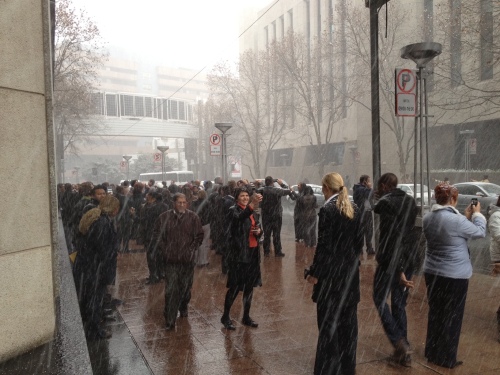 Once we got out, we laughed and giggled and stood in the snow with massive smiles on our faces. I looked around and saw colleagues having fun. I saw them laughing and hugging and taking photos of each other and acting silly. We were like kids! We didn’t care if it was cold and we didn’t care how wet we were getting. It was awesome. But for the 5 minutes we stood out there, it was as if all the problems disappeared. 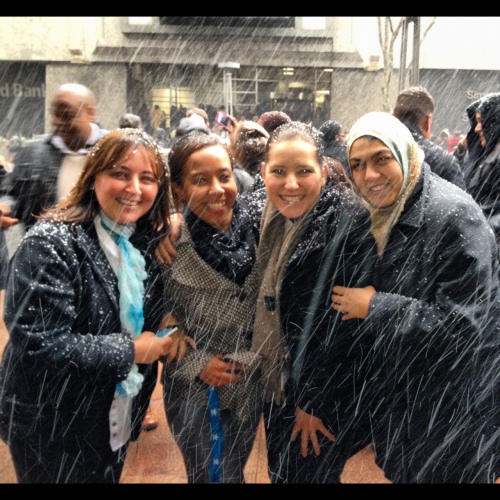 I realised that the snow was for me, more than them. You see, although I’ve been part of a project team where the focus is on “people” and changing that cold, hard corporate culture, I have also felt incredibly ‘responsible’ for their happiness in the office. It’s been a bit of a burden on my shoulders and a lot of my stress has been frustration in not seeing a change in culture and a vibe remaining so negative.

But today was different. Today came out of nowhere. The lesson I learnt was that laughter and fun will come at the most unexpected times. But also, that sometimes, I’m not the one that will bring about the change. I just need to be present. But most of all, I need to start laughing too!