One of the first instructions my running coach gave me was that I should not run any races until he tells me to. But as any runner will know, this is torture, especially when everyone around you is entering all of their favourite races.

So instead of listening to him, I entered and ran the Dischem 5km race in Bedfordview on Sunday morning. I thought, hey, it’s just a quick fun run. Surely it’s okay?

I expected to do brilliantly. I expected to shave minutes off my previous time. But I didn’t. In fact, as we drove home, I was hit by immense disappointment and irritation with myself. I had managed to run without stopping once. This was great. But I was slow and still running at 8 mins/km.

So I phoned my coach, sheepishly apologising that I had “skelmpies” run a race behind his back, but also begging him for answers as to why I was not yet running faster. After he gave me a firm lecture, I finally understood exactly why he had given that instruction.

You see, running by myself on a quiet Sunday morning around my neighbourhood is a very different experience to running a race. Even if I try fool myself in to believing that it’s a “fun” run, it isn’t. And it wasn’t on Sunday.

In fact, I was pumped. I was nervous. My adrenaline was flowing. I was tense, anxious and excited. As the race started, I was already thinking I was going to do brilliantly. Thanks to a great new friend (Craig aka @biggestbossfan) who ensured I did not walk once, I landed up completing the race in 40 mins. Yip, 8 minutes per km!

I was gutted! All I could think of was what about all my speed work? What about all the extra effort of 3 weeks of training? I felt miserable and disappointed. I took my eye off the end goal and landed up feeling highly demotivated.

My coach was right. It’s a massive psychological knock which I took and doesn’t help my training much. All I could focus on after the race is that my training wasn’t helping and that I was always going to be a slow jogger and yet, this is so not true.

I guess the biggest lesson I’m learning from my coach is patience. I’m realising that the end goal is not Two Oceans (a race with so much hype it stresses me out tremendously).

The end goal is in fact listening to my body. Believing in my abilities and having the patience to believe that it will happen. Eventually. Because it will. 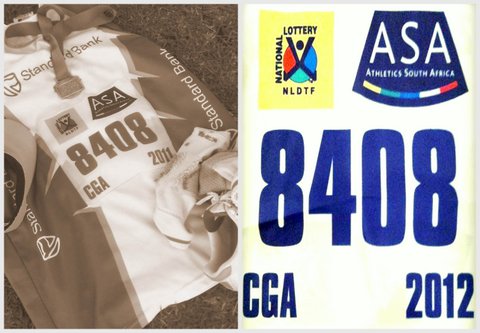 So I have my 2012 ASA number ready to be sewn on to my running kit and while I wait patiently for my first official run of the year, I will carry on training. I suspect that compared to last year, running in 2012 is going to be filled with many challenges and unexpected surprises of its own.

4 thoughts on “I didn’t listen. I thought I knew better. But I don’t.”